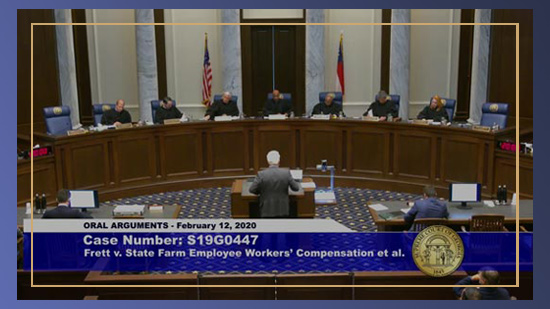 “The mishmash of arbitrary rules and exceptions described above shows that the scheduled break rule Farr created is not particularly workable. It is not based on sound reasoning and defies reasonable expectations about ordinary working conditions. ”
BLACKWELL, Justice.

For nearly 85 years, injuries that happen during a scheduled luich break were not covered by workers' compensation. This was an incredebly arbitrary rule that was used to deny benefits to thousands of Georgia's injured workers.

We are pleased to announce a victory—not only for our client—but for injured workers across the state of Georgia. Bourne law firm appealed this case all the way to the supreme court, arguing that the case law arbitraily denied workers compensation benefits to people who suffered injuries on a scheduled lunch break. The Supreme Court agreed with our argument and the "scheduled break" rule has been abolished..

The history of the "scheduled break" rule long and often confusing. In 1935, the Georgia Supreme Court decided that "scheduled breaks" for lunch are not covered under Georgia Workers Compensation law. In the Farr case (1935), the employee was denied benefits when he fell down the stairs while on a lunch break. The Court reasoned that he was outside of the employers control on an individual pursuit. Although thousands of workers have been denied compensation because they were on a scheduled lunch break, we believed that the Farr case was poorly reasoned. It ignored the statutory definition of a work accident as one "arising out of and in the course of employment". We fought this case through the Appellate Courts to the Georgia Supreme Court, in a process that took over 3 years.

The Supreme Court agreed with us that the Farr decision was poorly reasoned. Particularly they agreed that the 1935 case mixed up the "two prong test" for arising out of and in the course of employment. The Court rightly characterised the Farr case as "poorly reasoned" — even for its time — and overturned the 85-year-old case law.

Needless to say, the decision in Frett v State Farm marks a long-awaited return to the original intent of Georgia's Workers Compensation Act. It is hard to imagine how many injured Georgian's had been denied compensation under the former "scheduled break defense.""

In a major victory for injured workers, injuries during scheduled lunch breaks are now covered by workers compensation.

Ask the right questions before you hire an attorney for your workers comp case.

Everything you ever wanted to know about settlements in a workers' compensation case.